Things to do with an SDR, using Linux

Things to do with an SDR, using Windows 10 or 11, a Macbook or Linux PC or laptop

What is an SDR? (orignally posted on Compelecbox)

A Software Defined Radio is the front-end of a radio receiver built in hardware. It was originally designed to allow people in caravans and leisure homes and boats to have a low cost way to receive digital video broadcasts (DVB) or digital television. Those same chips have more recently been repurposed to be used for radio reception and due to their flexibility can be used to decode many types of demodulation and signal processing which can be done in software and customized to what the user desires. These can generally  be bought for less than 30 GBP and often come with aerials which will give basic reception but are best thrown away asap. I have made my own folded dipole aerial from coaxial cable and scrap plastic pipe that have performed 15 dB better! 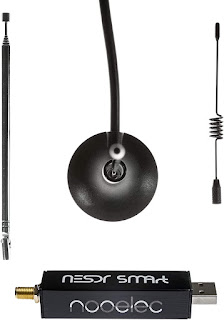 SDR are incredibly versatile and low-cost radios and can be used with an SBC or Raspberry Pi or maybe an old laptop or pc that has been repurposed with Linux to free your main box up. The only limit after initial purchase is your imagination, you only need to get software or write your own and build aerials which cost no more than some wood or plastic, wire and coaxial cable and plugs and sockets. Here are some used for them.

AM and FM for starters, actually AM and FM are incorrectly used to refer to 565 Khz - 1600 Khz (AM) and 88 Mhz to 108 Mhz (FM, UK frequencies). Most countries have similar radio bands to listen to current affairs, sport and music channels. Many SDRs will also record RDS (Radio Data System text as transmitted by the BBC in the UK which shows the station ID and record playing and music genre). 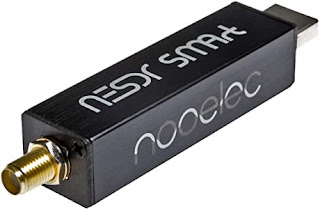 Many gadgets such as car remote locking and wireless doorbells use the 433 Mhz band to communicate and these can be received and decoded with SDR, an article is at cognito.me.uk/computing/windows/2015/05/26/rtl_433-windows-binary-32-bit.html

Please check the link in that article for an updated software release. This would then potentially allow you to control your PC or Raspberry Pi.

Licensed amateur operators (often badly referred to as ‘Hams’) have passed a qualification to transmit on certain controlled frequencies. But you can listen with no licence at all, in fact I have been earwigging since my father introduced me to it at the age of 13 years. He had a huge valve radio that had once been in a cargo or military aeroplane. I was hooked and soon mastered the radio and its single sideband modulation system used by amateur radio operators on shortwave. Amateurs also transmit on many VHF and UHF bands called by their wavelength 4 metres,  2 metres (144-146 Mhz), 70 cm (432 Mhz) etc. Many modulation methods are used but you can still pick up transmission in FM (NBFM) easily. These people are not confined to voice communication and also use SSTV (Slow Scan TeleVision) and data systems. List of amateur radio modes

In the UK the 27Mhz band can be used legally by anyone without a license so long as you use AM/FM/PM/SSB modulation and less than 4 watts or 12 Watts (SSB only) ERP. I notice this was updated in 2006 and 2014 as originally it was 2 watts and FM only. See more details at ofcom.org.uk. I admit that I used illegal 27 Mhz AM radios in the bad old days in the 1980s and there were a lot more people using it then. It is still popular in remote locations and by truckers in some countries but has also been replaced by PMR on 446Mhz due to its superior quality, smaller size and battery life and tone-burst squelch.

PMR446 covers band 446.0–446.2 MHz. Radios may now have removable antennas in some countries as long as the ERP does not exceed 500 mW, for example in the UK. The general ECC decision however still requires integral antennas and the actual implementation varies between different countries. (Wikipedia) These are used by private individuals and small companies alike and have a range in free air of about 1-2 km. I personally own a set of 2 walkie-talkie style PMR to take to my partner on our cycles and from house to garage.

Private radios are either vehicle mounted or hand-held, to fixed base stations. These still exist but many have been replaced by low-cost mobile phones. The operators need to have a licence to operate, but the individual users do not. They are generally on VHF and UHF frequencies,

These used to transmit digitally encoded data in the ‘in the clear’ but GDPR in the UK has made it necessary to encrypt data to protect personal information like name, medical records and phone numbers. Some that only transmit data may still be in the clear. Decoding requires software to decode POCSAG….

NOAA noaa.gov feature many types of radio transmissions, The most popular seems to be  the Weather Satellite Broadcasts. You can get the most up-to-date weather photo maps, mostly in black and white, but some Russian transmissions are in colour (artificial). The frequencies are mainly around 137 Mhz and dedicated aerials are often used as the signals are not very strong due to the height involved (also see my text about the ISS on 145 Mhz as the same aerial can be used for both), also 1690 Mhz is also used but budget SDR may not have the sensitivity as the limit of their frequency range which is often limited to 1.7Ghz. An article on Windows software and aerial construction is at receiving-noaa-weather-satellite-images.

Another article and links to Windows/MAC/Linux software is at mattg.co.uk/words/noaa_sdr.  Generally you will use software to record the transmissions which contains all the data within audio frequencies. Of course you can only pick up satellites when they are overhead!

Each countries’ team in the ISS has their own language/country channel and there is a main feed to NASA/the general public. This is around 145 Mhz and you can use the same aerial as the NOAA satellite one (137 Mhz). The ISS is visible for 3- 6 minutes and you can app mobile apps to notify you when it will be overhead and visible in your location.

These can be anything from private light aircraft to commercial aviation for passengers and cargo. Military transmissions are rarely unencrypted and use different frequencies and probably modulation techniques.

In the UK we have a comprehensive system of rivers and canalways. These have their own dedicated frequencies and are unencrypted.

Well that is the end of my article, I would welcome any uses that I have missed and would love to hear about your success or otherwise in building projects around SDR.

Sunday, March 07, 2021
I wanted a Discone type aerial, they look great! Then I read some reviews and people said that a dual band dipole worked better. I also wanted to be able to use it for different bands. So on YouTube I found the best dual band aerial design I could. Then I found this 2M ground plane aerial/antenna . why not combine elements of both? So why would this work? Well, when an antenna or aerial is resonant it's impedance falls to around 50 Ohms. When it is outside resonance the impedance rises to several thousand Ohms and becomes irrelavent as it reduces the signal. So when you are on 2M the other tripod elements are ignored and you can achive good power transfer and gain. The same is true for each other band. I have seen this on other aerial designs too. It does work I promise you! Antenna vs aerial, what is the difference?  An aerial is to receive radio signals only, there are other design considerations but an Antenna has to cope with high voltages and heat. An antenna is designed to
Post a Comment
Read more