I wanted a Discone type aerial, they look great! Then I read some reviews and people said that a dual band dipole worked better. I also wanted to be able to use it for different bands. So on YouTube I found the best dual band aerial design I could. Then I found this 2M ground plane aerial/antenna. why not combine elements of both?

So why would this work?

Well, when an antenna or aerial is resonant it's impedance falls to around 50 Ohms. When it is outside resonance the impedance rises to several thousand Ohms and becomes irrelavent as it reduces the signal. So when you are on 2M the other tripod elements are ignored and you can achive good power transfer and gain. The same is true for each other band. I have seen this on other aerial designs too. It does work I promise you!

Antenna vs aerial, what is the difference?

An aerial is to receive radio signals only, there are other design considerations but an Antenna has to cope with high voltages and heat.

An antenna is designed to receive and transmit, it needs to be tuned to minimise the SWR (Standing Wave Ratio) to get the most output and reflect the least power back down the coaxial cable to the transmitter. I currently have no transmitter. * see below. So I need an aerial and they are easier to make as they do not need to be so accurately tuned. That said it is worth getting the length of the elements to be close to 1/4 wavelength of the desired frequency.

We know our wavelength(s), and as there is a huge gap between them we can make an aerial to do both.

This is the length that we need to make the receiving element, the top one, we will call this LR.

As we are making a ground plane with 4 angled reflectors at 40 degrees off the horizontal we need to do some maths. The length of these reflectors we will call LB. I also made the elements about 12mm longer so I could trim them in situ and also because I may want to use this to transmit so will need to set up SWR ratio too. Yes, I am finally getting my Amateur Radio Licence!

Maybe I could build an aerial that would have three elements and optimise all three bands?

Measure the distance between the central connection of the PL259 socket and the mounting hole diagonally, I measured 13mm, we'll call this measurement LA.

So what about 70cm reception? Well so long as the ground plane is larger than the 1/4 wavelength we can ignore it. If you want to make more radials here is the calculation for them. I will show you how to integrate them into the design. 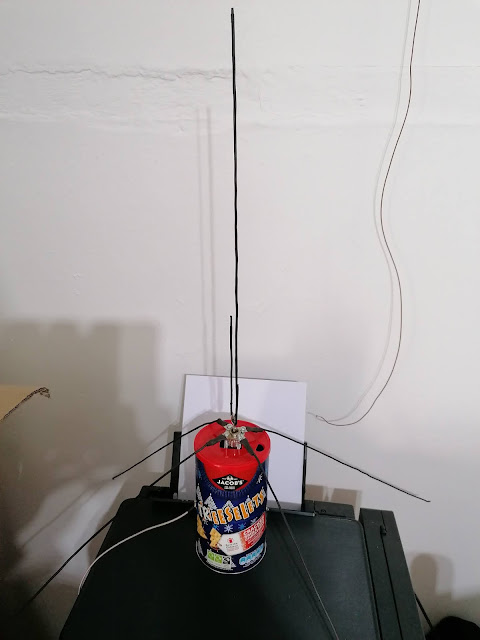 If we were going to transmit then we would add 10% to these lengths and trim them as we test the SWR ratio. For receiving they will be fine as calculated.

We need the following parts

2-3m length of 2mm Copper wire or welding rod if to be used outdoors and depending if you are using dual reflectors.
1 x SO239 socket
1 x PL259 plug to BNC socket adaptor (you should of course connect directly to the SO259 but I use a BNC plug to enable me switch aerials easily)
1 x BNC plug.
2-3 m plastic tubing 15-30mm diameter, or a brush steel (or plastic pole) to mount, or a Cheeselet tin for temporary use.

You will also need something to solder with, my 70 watt temperature controlled soldering iron was not powerful enough to solder 2mm copper wire into the SO259 socket, the heat gun on my iron would do it but caused excess heat to melt the nylon insulator and still the joint was dry-jointed and fell off after a bit. So in the end I used a gas torch like this one below, because it heats fast the chance of damage is reduced, but you will need to tin the wires and socket with a soldering iron first. 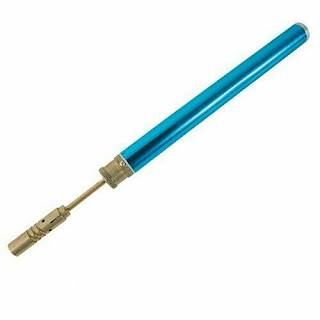 I intend to mount the aerial outdoors once proven and fit it to an old satellite TV dish mounting pole.

One article quoted a single band one used it for LORA transmissions and he estimated 6dB gain which is great! It may be less with dual reflectors but worth it for the convenience. Also due to being home built on the cheap, we can experiment with extra bands and configurations by just unscrewing the parts and saving them.

Here are my efforts, you could roll the copper wire lengths between two pieces of  wooden board to straighten them more, I didn't. I made one length of wire bet double to work on 70cM and 2M and the short vertical in the centre to tune for 1090Mhz. I fashioned them into a trident shape which may not be the ideal impedance for transmitting. I will revisit that issue once I am licensed.

Once you are happy with it you might want to coat the connections to the SO235 socket with hot glue or caulking to keep moisture/weather out. You should the run your aerial cable through the plastic tubing or through a hole in the side of it before soldering thePL259/BNC plug to it and sealing that into the tubing to act as a stand or mounting pole.

This was inspired by the design on YouTube for a LORA antenna, and appropriate frequencies and this 2m version. You can make this as sophisticated or basic as you want for your own needs. The low cost and simple construction means experimentation is pretty easy.

I will pick some spot frequencies and turn AGC off. I tested in Mint Linux with my new RTL-SDR and GQRX, I preset the gain to 32dB. I measured using the strength meter built into GQRX at the top of the screen. 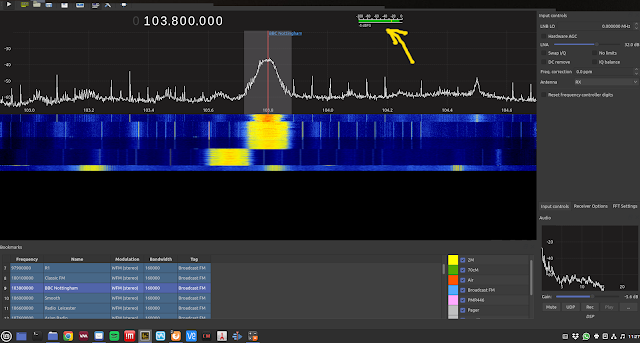 The first dB figure is my commercial dual band whip mag mounted on a filing cabinet as a ground plane, the second figure is the trident multi-band ground plane balanced on a chair back.

These results are very experimental as the antenna is in my workshop and affecting by movements etc. but it gives a ballpark fugure. Overall I am very happy with my efforts, I had previously built am airband/2M folded dipole using some co-axial cable and plastic pipe which when compared to the cheap aerial that came with a NooElec Smart SDR gave a 15dB improvement due to the poor earthing and construction of the supplied whip. So most amateur radio users and makers will tell you similar stories. As always I welcome your comments and suggestions.

Update - Whilst I was happy wth the performance this looked pretty tacky, so I did more research and found out that if you grip the serial rods at one end with a pair of pliers and put the other end in a drill chuck and spin it slowly it straightens as if by magic! I did this for each element and then covered them in heat shrink sleeving. I then heated the sleeves with my heat gun. If I decide to use it outdoors I will cover the rest in hot glue to seal the junctions. PL259 to BNC adaptor, I then reduce to SMA, this is far from ideal but I will make up a proper cable when the design is finalized


Another development is that I passed my Amateur Radio Foundation license! I have trimmed the 2M and 70cM legs and can report SWR under 1.3 so I am very happy with that. Next stop - Intermediate License!