Links to code and video at the bottom of this article

So, I was looking at the price of photo floods for photography and video production and baulking at the prices. I had previously used a battery powered one with 160 LEDs that cost around 20 GBP which was ok for basic photography lighting fill-in, that is to supplement room lighting. But for video you really need something more powerful. So my criteria was

I have seen WS2812 256 LED programmable matrixes sold for as much as 70 GBP which makes me baulk! But a bit of research and some special offers on Ebay (other sources are available) had myself and my partner ordering one each on top of the one I already had sourced and tested some simple programs on. Now these are generally designed to have patterns, words and graphics displayed on them and I did buy a 8 GBP controller which can operate form a mobile phone and made some pretty patterns on one. I had heard a few people say that you should not run these 100% on all LEDs and it is also mentioned that the LEDs can become de-flowed, that is desoldered. Well you have been warned and the hobbyist is likely to be capable or soldering a few joints in the even of a problem.  I think this will put out 5 Volts x 7 Amps = 35 Watts. Probably equivalent to 150 watts of incandescent lighting but with RGB control! 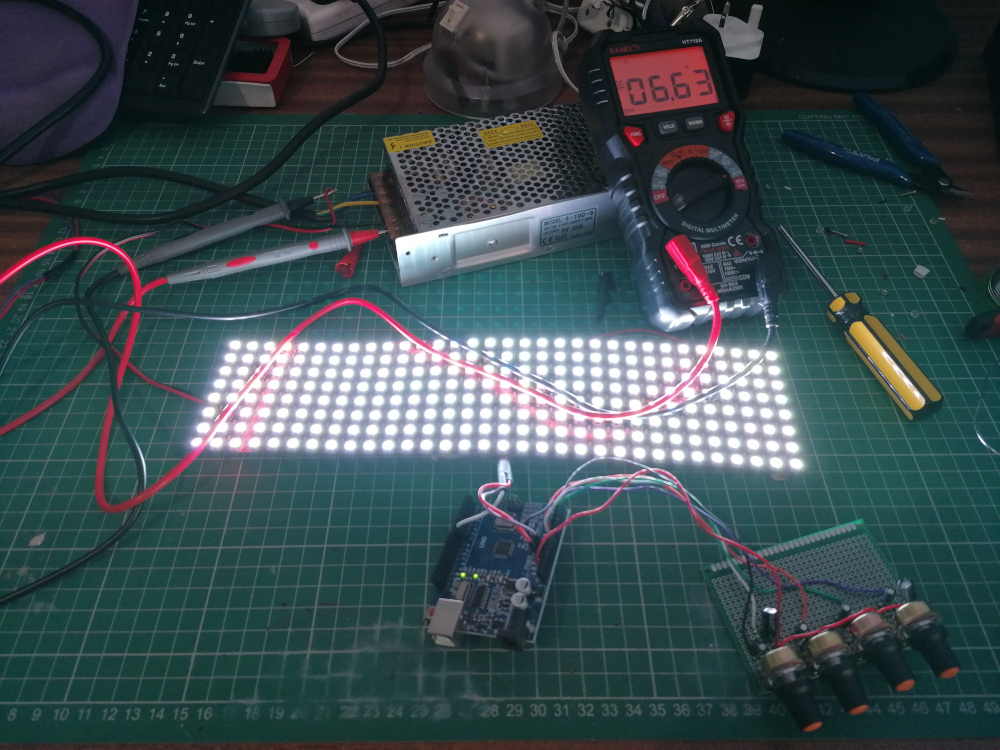 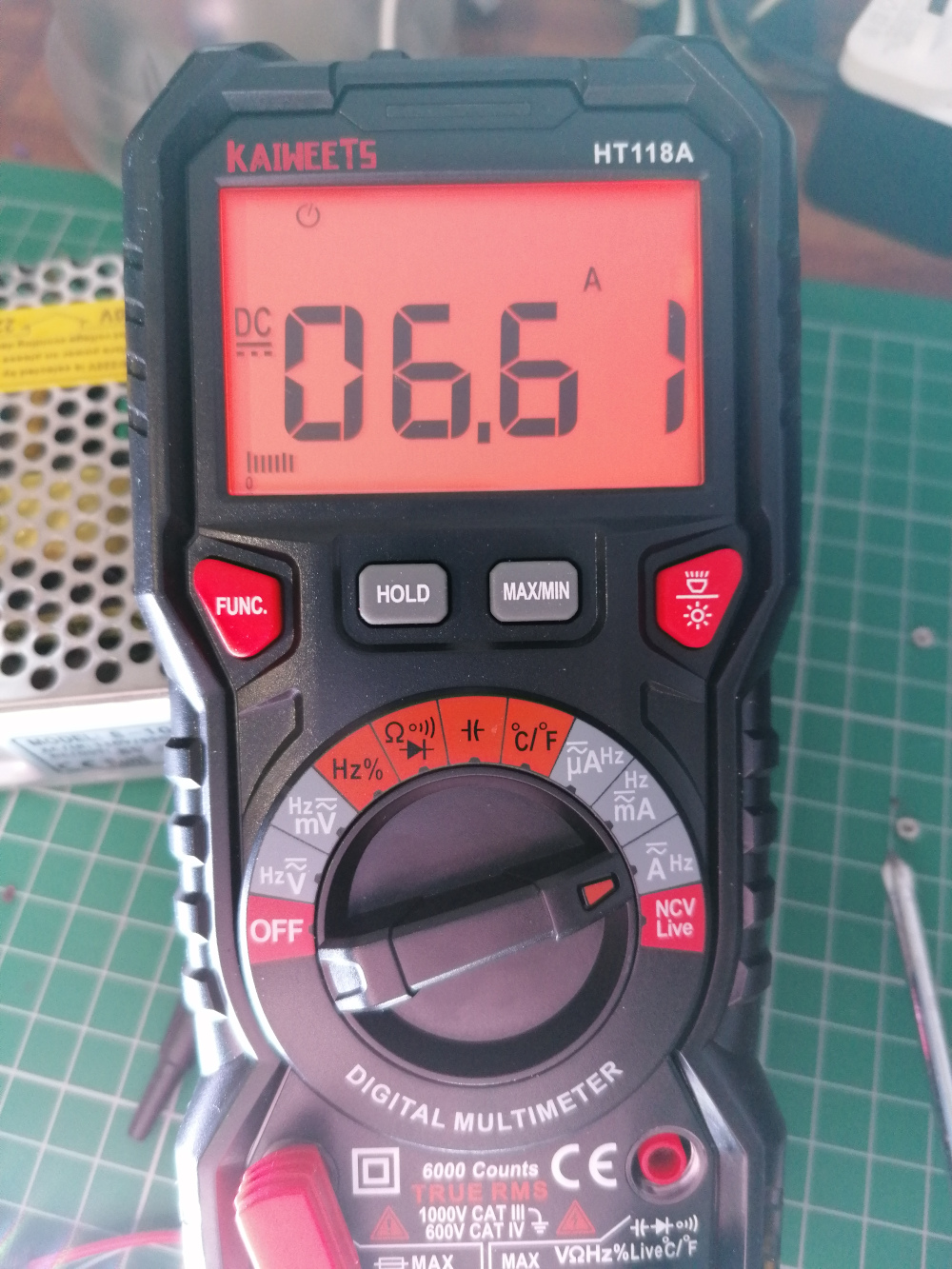 As for cooling I will be installing a PC cooling fan in each box. I reckon they consume 6.7 amps when fully on. You will need substantial wire from the 5V power supply to the LEDs as I managed to almost melt mine when trying to drive 3 LED matrixes at once!

The circuit was proved using an Arduino UNO on breadboard and I initially mounted the controls and resistors on prototyping board, even though this was only a half sheet i knew I had enough space for an Arduino Nano or Arduino Every. The Every is pin compatible and available in three packs, well I did want to build three of these so I ordered them from Ardiono.cc
https://store.arduino.cc/arduino-nano-every (single)
https://store.arduino.cc/nano-every-pack (3 pack) 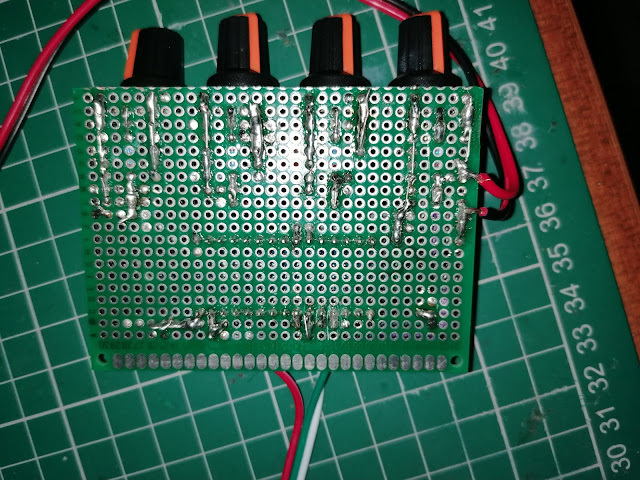 Not too many connections to the Arduino Every
The assembled electronics. Use extreme caution with testing using mains voltages, it can be lethal. I will add a mains switch and 1 amp fuse and fuse holder and build it all into a box for safety. 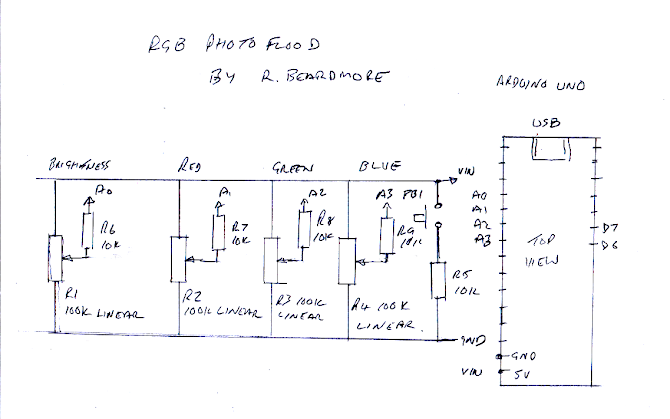 Parts List (Amazon links are associate links for which I earn a small commission, you pay no extra at all)

IC1 Arduino Nano or Every https://store.arduino.cc/arduino-nano-every

1 x PCB or prototype board https://amzn.to/2WwvGAL

Sunday, March 07, 2021
I wanted a Discone type aerial, they look great! Then I read some reviews and people said that a dual band dipole worked better. I also wanted to be able to use it for different bands. So on YouTube I found the best dual band aerial design I could. Then I found this 2M ground plane aerial/antenna . why not combine elements of both? So why would this work? Well, when an antenna or aerial is resonant it's impedance falls to around 50 Ohms. When it is outside resonance the impedance rises to several thousand Ohms and becomes irrelavent as it reduces the signal. So when you are on 2M the other tripod elements are ignored and you can achive good power transfer and gain. The same is true for each other band. I have seen this on other aerial designs too. It does work I promise you! Antenna vs aerial, what is the difference?  An aerial is to receive radio signals only, there are other design considerations but an Antenna has to cope with high voltages and heat. An antenna is designed to
Post a Comment
Read more